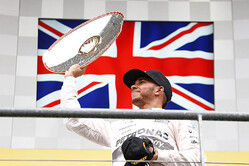 Lewis took his second Belgian Grand Prix win, the 39th of his F1 career and sixth of 2015. Nico completed a seventh Silver Arrows 1-2 of the season with his 36th career F1 podium finish. An 80th career F1 podium for Lewis sees him move level with Ayrton Senna in P4 in the all-time standings. Both Lewis and Nico ran a two stop strategy of option / prime / option

Lewis Hamilton: I'm really happy with that one. I had great pace in the car and the balance felt fantastic. If anything it got better through the race and I never felt under pressure. After the stops I took it a bit easy on the out laps and Nico closed up but I always had a comfortable gap. A massive thank you to everyone here and back at the factories for all their hard work. The car was awesome all weekend and the crew did a great job. The weather has been great here too which makes this circuit even more fun to drive and what a great crowd. Loads of noise and plenty of British flags out there too which I really appreciate, so thanks to all of you for your support and hope to see you again at Monza!

Nico Rosberg: Unfortunately I messed up the start. Maybe the extra warm up lap had an influence on that - we need to find out what exactly happened but, in any case, I definitely have to improve that for Monza. Because of this I had to play catch up, which worked out well to a point. I managed to be second again and also was able to close the gap to Lewis a bit - but I didn't get a chance to come within overtaking distance. He deserved the win today and it was also a great result for the team. The car they gave us was awesome here, so thank you to them for that. Hopefully we can have the same level of performance in the next races. I'll be pushing as hard as ever for sure.

Toto Wolff, Head of Mercedes-Benz Motorsport: I'm very proud of the team after today's result - and especially to get a 1-2 finish at Spa, which is such a difficult and demanding circuit to master. Lewis did a perfect job - he got off the line well, defended cleanly his position from Perez up the hill and then drove a beautifully controlled race. He had the pace when he needed it, coped comfortably with all the challenges during the afternoon and scored a really impressive win. Nico obviously was hampered after his start, which we need to analyse, but then worked his way calmly back through the field. He kept Lewis honest all the way but couldn't quite close the gap. Congratulations to our boys, too, on four clean and impressive stops; they're doing a stunning job in the pits this year and we aim to continue that way for the remaining races. We will savour this win but need to keep our heads down and carry on working hard for Monza."

Paddy Lowe, Executive Director (Technical): We're all very happy indeed with that result and a fantastic performance all round from the team. It's always great to win at one of the legendary circuits on the Formula One calendar and this was one which Mercedes hadn't conquered in the modern Silver Arrows era, so it's good to be able to tick it off the list. It was a quite amazing weekend from Lewis - from an incredible pair of laps in qualifying to a controlled drive to victory in the race. Nico, too, had a very strong weekend. Of course, I'm sure he'll be disappointed to finish second - but he was in touching distance throughout. Congratulations also to Lotus. It's extremely pleasing to have an all-Mercedes- powered podium and no doubt a big boost for a team who have not had the easiest of times recently, so well done to them.