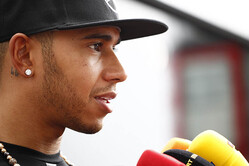 Lewis Hamilton has admitted concern at the prospect of Mercedes supplying rivals Red Bull with engines.

With Lotus, Force India and Williams already benefitting from the reliable and powerful units, the thought of an Adrian Newey penned Red Bull chassis enjoying the same clearly has the world champion worried.

With Renault thought to be close to announcing a buy-in at Lotus, it is speculated that Red Bull will call in the divorce lawyers and switch to Mercedes. Not a good idea, suggests Hamilton.

"I think if we're serious about winning world championships, probably not," he replied, when asked if such a move would be a good idea.

"Red Bull is a great team and it's like giving Ferrari our engine," the Briton told Sky Sports. "We're here to win so we don't really need it. There's no financial benefit really in it, so I think we're good where we are."

"From a team perspective you have to have a no-prisoners approach and look in an opportunistic approach," he said. "But it's also a matter of what we can do to make F1 function."