Mercedes ups the ante for Monza 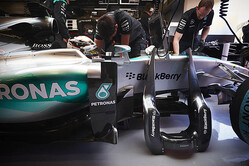 Mercedes has opted to use all its remaining engine development tokens for Monza.

The German team confirmed the move in a series of tweets this afternoon.

"Our drivers will take their third Power Units of the season and it will be a new spec using our remaining 7 development tokens," the Brackley outfit revealed, though it didn't specify which areas have been developed in using the tokens.

"We’ve tactically pulled forward planned 2016 development to learn about a new spec of Petronas fuel out on track," they added. "The goal? A dash of R&D exploring a new development direction to unlock more performance for the whole Mercedes family in 2016!"

The move however, will only see the works team benefit, as customers Williams, Lotus and Force India will not have access to the new units which see Lewis Hamilton and Nico Rosberg take on their third engines of the season

Ferrari has used 3 of its remaining tokens for its home race, leaving the Italian team with 10. Honda has 4 remaining and Renault 12.