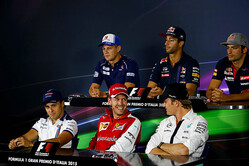 Nico maybe we could begin with you, congratulations, I understand you became a father. How will it change you and have you decided on a name yet?
Nico Rosberg: Yeah, for sure it's been very exciting, very intense of course. Big respect for all the mothers of this world - unbelievable. No, very emotional and super happy. Very excited.

You'll obviously be losing a little bit of sleep then in the coming weeks but you've also been losing a few places off the start line lately, with both the old and the new rules on starts, so it's now three races in a row, making race day a bit more complicated for you. What thoughts have you and the team had on that and how you are going to address it, as particularly here in Monza it's a long run to turn one so any loss off the line would be amplified by turn one?
NR: Yeah, it's true that starts have not been our strength lately, so we've been working on it a lot, making progress and then of course the rule change also came in right in the middle of, or off the back of two starts that hadn't been fantastic. So it's a work in progress and we need to improve for sure, we know that, and we're all getting into it.

Thank you. Sebastian, when you started with Ferrari you said you were living the dream and here you are, at Monza, a Ferrari driver, in front of the tifosi. Can you put into words the sense of pride, responsibility, expectation, dare we say even emotion that comes with the job?
Sebastian Vettel: No! Well, I'm about to find out. Obviously I've heard lots of good things. I've been here before so obviously [I have seen] the passion for Ferrari, so obviously very much looking forward to becoming part of that. If we do well, which is our target, and we manage to be on the podium on Sunday I'm looking forward to not receiving booing for a long time. So, yeah, plenty of stuff to look forward to. So far we have had a great season. This is our home grand prix as a team and since I didn't have a home grand prix this year I adopt this one as well and hopefully we can make it a good one.

Now, you made you feelings very clear to the media in Spa about Pirelli and the tyre failure. Having now seen the results of the investigation, what are your considered thoughts on the matter?
SV: Well, first of all I think there was a lot of stuff explained or written that I think was not correct, the way it was expressed. I think it was very clear what I said. I think the most important point is that obviously we have been looking into the issue we had very clearly and Pirelli has been supportive and very open in the discussions, so I think that's the most important thing and we need to make sure that we learn from that. Other than that we are in Monza now and, as I said, there is plenty of other stuff to look forward to.

Thank you for that. Felipe, coming to you, obviously confirmed for 2016 [at Williams]. On the podium here last year, third for Williams and you're always popular here with the fans thanks to your years with Ferrari. Given Williams' chassis and engine characteristics can you dream of maybe moving to a higher step on the podium on Sunday of this weekend?
Felipe Massa: Yes, for sure. Dreaming is for free. You always dream about the best, about winning the race. Here is one of the best places to be on the podium, to see the whole people, the whole straight [full] of people, especially. Last year that everybody was also happy that I was there on the podium, screaming my name, I think it was so nice, so I'm really looking forward for another one and definitely we dream even to get a better position than third. When you go to the grid you're thinking about doing the best and thinking about the victory. That's what I'm doing every race and it's another one where I will try everything I can to be there.

If we you look at your recent record, you out-qualified Bottas six-five this season, finished ahead of him in the last four races and moved ahead of him in the championship. What's driven this strong run of form for you?
FM: I think last year I was very competitive as well with my team-mate. We were fighting the whole season I would say. The only thing is that the results of the race are a lot more consistent this year. Last year I had a lot of problems, many races where so many things happened and I couldn't finish in the position I was supposed to. I think this year the situation is a lot more consistent and I managed to score points and finish more or less where I was supposed to in most of the races. I think that's really good, but we have many races to go and you always want more.

OK, thank you for that. Daniel, coming to you, you obviously come from an Italian family that emigrated to Australia. When you come here how Italian do you feel and how have the Italians welcomed you in the last few days during all the various promotional activities you've been doing?
Daniel Ricciardo: I start talking with my hands a bit more! It's automatic: you arrive in Italy and you start using your hands. What was the question?

Apart from how Italian you feel, how have the Italians welcomed you in the past few days in the various different things you've been up to?
DR: It's always a warm welcome here, for sure. The fans are... I've always said it, they're passionate; they're full on but they're great. They love the sport, they love getting close and having their moment and stuff. It's pretty cool walking into the paddock. It creates a bit of a road block but... I think it's the craziest paddock entrance we go to all year in terms of the fans spreading their love, but it's nice. I remember the warm-up lap here last year, I think I crossed the second Lesmo and there was a flare blowing across the track... it's unique, so it's cool.

Red Bull has yet to lead a lap in 2015 and you've spent a fair chunk of the races somewhere between P5 and P7. Tell us about how you've set targets for the remainder of the season and also about the decision on power units for you and your team-mate this weekend?
DR: Looking now towards the last part of the season, the last couple of races have been our strongest, as of late, Budapest and Spa have gone well for us. I think in terms of understanding the car we're much more on top of it now than we were earlier in the season. I think the chassis is back to a really strong level. Monza's not obviously a circuit that suits us particularly. We've got the penalties as well, so you know that's obviously a strategic things as well - take the penalty here rather than in Singapore where we expect to be very competitive. Then, yeah, have some fun here on Sunday, come through the field as far forward as we can and then Singapore, we can really fight for a podium there.