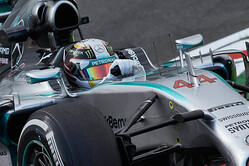 Mercedes AMG Petronas kicked off the United States Grand Prix weekend at the top of the timesheets, with Lewis Hamilton leading Nico Rosberg by the narrowest of margins at the Circuit of the Americas.

Lewis finished the first session in P1 with Nico two-tenths further back in P2. That result was echoed in the second session but with the drivers separated by just three- thousandths. The medium compound Pirelli tyre was used in the morning session, the medium and soft in the afternoon. Lewis has his afternoon cut short by a hydraulic problem.

Lewis Hamilton: The car felt good today and we were able to improve consistently over the two sessions. I only got a couple of laps of my long run which was unfortunate as we lost a bit of track time but Nico got the data for the team so we should be ok. I'm not sure exactly what the problem was and we had to stop as a precaution but I'm sure they will identify and fix it overnight. These small glitches happen and I'm confident that we won't have problems moving forward. It's better that it happened today rather than later in the weekend, of course. It looks very close with Nico out there and I'm expecting a very tough battle this weekend. I love being here and it's great to see so many fans around the circuit already, so I'm excited for the rest of the weekend and feeling ready to put on a show for them.

Nico Rosberg: Our Silver Arrow feels very quick around this circuit which is very impressive to see. Between Lewis and myself, the times were very tight as usual. But it was worrying to see that Lewis had a problem with his car as it shows that our car is still not 100% robust at the moment. We need to work on that but overall I'm really looking forward to the weekend. It looks like it will be a close battle between my teammate and I, so let's hope we can put on a great show for the fans here in Texas.

Toto Wolff: While it is positive to see strong pace from our car, the main focus must be on ensuring bulletproof reliability. Of course, it is better to have these problems on a Friday than on a Sunday and we will be working hard overnight to ensure that this is not the case. It is great to be back in Austin and to see Formula One growing in stature here in the United States. It is a key market for the sport, so to see the reception we have had already this week is a big positive.

Paddy Lowe: We've shown good pace here today and both drivers are happy with the performance of the car. Unfortunately, however, Lewis had his afternoon cut short by a hydraulic problem. We spotted something in the data and decided to call Lewis in to play it safe. That aside, we ran to our scheduled programme throughout the day. The tyre compounds nominated for this race - medium and soft - are a step softer overall than those seen last year. As such, they are coming into their window quite quickly and we are seeing a reasonable amount of degradation on the long runs - both on the prime and option. This should lead to a notably different race from a strategic perspective to that in previous visits to this circuit - or indeed at the last race in Sochi.