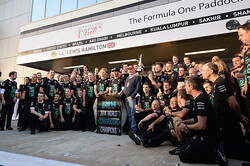 Every single member of the 2014 title winning Mercedes F1 team is to receive at least £10,000 as a celebration bonus.

Still celebrating its first Constructors' Championship, the German manufacturer, which won the Drivers' Championship with Juan-Manuel Fangio in 1954 and 1955 (the constructors' title not coming into existence until 1958) is to announce news of the pay-outs at its Brackley HQ on Tuesday morning.

This morning, the team celebrated its win with bacon sandwiches, Toto Wolff and Niki Lauda addressing the workforce, every member of which was kitted out in T-shirts proclaiming Sunday's title winning success.

Whilst attention is still focussed on the Drivers' Championship, which is now effectively a two-horse race between Lewis Hamilton and Nico Rosberg, it is the constructors standings that decide the all-important prize money and also, in the eyes of the manufacturers, carries the prestige.

Having secured the constructors' title, Wolff says his two drivers are free to fight all-out for the drivers' crown, Hamilton currently leading his teammate by 17 points.

Wolff has also made it clear that despite having Hamilton under contract until the end of 2015 he is eager to extend the deal, though the Briton, and his management, might wait until the title is decided in order to see if this drives his value higher.

However, waiting in the wings, whether Hamilton wins the title or not, is Fernando Alonso, who is thought to be eyeing a possible vacancy with the world champions. However, Wolff insists he wants to retain his current drivers for 2015 and beyond.

"We have a contract with both our drivers for 2015, and we want to continue with the current line-up," said the Austrian. "That is because these two boys are part of the success of the team, they know each other so well and they respect each other. The moment you get somebody else in that fight could be detrimental to the team's performance. So our main priority is to continue with Lewis and Nico beyond 2015."

However, with three races remaining, Wolff insists that negotiations can wait as his drivers concentrate on the business in hand.

"We have agreed with Lewis we want to concentrate on the championship and leave him alone," he added. "We want to give him the same possibilities as Nico, and for him not to get involved in commercial, financial and legal discussions until after Abu Dhabi. My commitment to him as well is we're not going to talk to anybody about any terms or contracts until then."