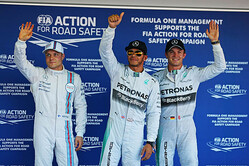 Lewis, congratulations on a superb pole today. Tell us what you feel about pole position for this race, this first ever Russian Grand Prix and how important is it to be on pole around here?
Lewis Hamilton: I have no idea in that sense but of course pole is a great place to start. Firstly, an amazing job done by the team; constantly improving and moving forwards this year. Thanks to them we're able to be on the front row quite often. It's great to come here. It's a beautiful place and the weather has been amazing and really enjoying driving this track. It wasn't the easiest session. These guys were looking quite strong. Just hooking up a lap from some reason it wasn't the same as practice. But I'm really grateful that I got the pole here for the first time. It's going to be tough tomorrow. It's a long way down to turn one, so we'll find out how that works out.

What is it about the circuit? A lot of drivers have called it 'cool'.
LH: It is very cool. Yeah, definitely. The track surface is great, it's very smooth but it has a lot of grip. The kerbs are just done really nicely and obviously the surroundings, you know when I landed here seeing the mountains... and also being around where they put the Olympics on, it's quite an incredible place. And today we had a good turn-out as well for the first Saturday of the race here so I hope that tomorrow is even better and that we can put on a good show for them.

Nico, second on the grid. This is an important race, isn't it, to get some points?
Nico Rosberg: Every race is important at the moment. We have four to go. They are all just as important. Yeah, today Lewis was quicker - all weekend really. So I've been working hard to try to get close but didn't manage to get closer than those two tenths now but that's the way it is. I need to accept that. Also, I had the Williams or Valtteri coming up from behind, going quick, so I needed to keep and eye on that. But front row is OK definitely and from there everything is possible tomorrow. It's going to be an interesting race. It's very unique here because there is hardly any tyre degradation. The track is so smooth on the tyres or I don't know what. It's completely different to everything else we've seen this year and that makes it very unique. It's been a big challenge set-up wise and everything to get to grips with the track this weekend. Yeah, I think it's going to be a good race tomorrow.

Valtteri, so, so close. I think the entire grandstand heaved with excitement when you went off, right at the end on that last corner. Nobody else has been off there either.
Valtteri Bottas: Yeah, well I didn't know at that time that it was close to the pole. I only knew how it was compared to my best lap, which was the previous lap, which was not bad. I knew I had one more lap to go. Maybe, looking back I took maybe a bit too much out of the tyres in the beginning of the lap and the last sector became a bit more tricky. As I was gaining time compared to my best towards the end it became more difficult in the last few corners. I risked it a bit too much in the last two corners, went a little bit wide and when you go offline it's really slippery like everyone saw and that was it.

Are you very upset about it?
VB: Of course, yeah. It's not nice to make a mistake. I think in the end today it maybe cost one place maximum. Anyway, I think the mistake was taking a bit too much out of the tyres in the beginning of the lap, that's what made me struggle a bit more in the end of the lap. The lap before, I'm quite happy about that.

Lewis, some of the corners around here seem to invite errors. What kind of race are we going to see tomorrow?
LH: I don't necessarily think they invite errors. At the end of the day we're pushing all the time so you're going to see those mistakes or hiccups occur all the time but they're generally easy to recover from. It's a very fast, flowing or medium to high-speed, fast, flowing circuit. I really think that tomorrow is going to be a good race for people to watch. You've got the long straight that you can follow on, the DRS. It's nice and wide so hopefully you should be able to follow quite nicely. It could be one of the better races we've had for a long time.

Lewis, an interesting message from your engineer saying he though the track was slowing and then you go and pop it on pole.
LH: Was I not on pole at that point?

You were, but you improved.
LH: Yeah, I improved, absolutely. He said that the track looked like it was getting slower. To be honest I couldn't really hear the message that clear but I kind of worked out what he was saying. But I was up on the next lap. It wasn't a perfect lap. I think there was more time in it. It's a fine line obviously; we're all pushing out there. As I said, it didn't feel as good as the P3 session but hopefully tomorrow should be good.

This morning we saw you had a rather strange incident. What happened there?
LH: I just basically made a mistake. I had the brake bias set the wrong way, forgot to reset it, had it too far rearwards and as soon as I touched the brakes I just locked the rears. Fortunately, I got away with it without damaging the car.

And we mentioned a moment that it invite mistakes but we see a lot of people going off that corner, Turn 17. There are certain corners where people do go off - Turn Two, Turn Four as well. What is it about those corners?
LH: I would say probably the exit of Turn Four... when you're going into it it's very wide and all of a sudden it gets quite narrow on the exit, so it's very misleading when you go into that corners. For 17, it's very hard to find the braking point and know how much speed [you can carry through]... the car is at the end of the lap, the tyres are overheating, it's hard to know how much speed you can take through there. Plus, if you've had a good lap, you don't want to lose it, so it's a real fine line at those two places.