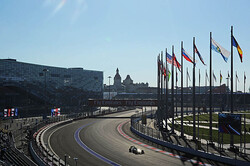 Despite the new location it was business as usual this morning with Mercedes filling the first two places on the timesheets. Nico Rosberg led the way with teammate Lewis Hamilton just 0.65s behind.

The main opposition, certainly this morning, appeared to come from McLaren, though both Ferraris were up there.

Being Friday, and being the opening session on a brand new track, it will be tomorrow when the remaining teams really show their hands, but currently Mercedes looks set to add another trophy to the cabinet this weekend.

The new track surface meant a number of offs, with Turs 2, 15 and 17 being the scenes of the most incidents.

Tyre choices are medium (prime) and soft (option), the latter making their first appearance in the coming session.

Having been by their teams' reserve/test drivers, Kamui Kobayashi and Esteban Gutierrez are back in the hot seat this afternoon.

The lights go green and Chilton leads the way, followed by Gutierrez. Chilton is Marussia's sole runner this weekend, the team opting not to run Jules Bianchi's car out of respect to the Frenchman.

Currently 20th, 6.396s off the pace, Grosjean complains that he thinks he has a problem with his rear suspension.

Rosberg posts 41.508 having been quickest in the final two sectors however, teammate Hamilton is on a hot lap. A poor final sector however, means the Briton fails to improve.

Behind the Mercedes, it's Button, Alonso, Kvyat, Bottas, Magnussen, Perez and Vergne.

Meanwhile, it's revealed that Hulkenberg faces a five-place grid penalty after the team has opted to change his gearbox.

As Raikkonen remains firmly rooted at the bottom of the timesheet (49.949), Grosjean is the latest driver to have an off-track moment, this time at T4.

With 56:10 remaining, only Alonso, Gutierrez and Ericsson are on track, the Mexican the first to switch to the option (soft) rubber. As he pits, Kvyat complains that his car is "lazy" and "not responding".

As Gutierrez begins his flying lap, Sutil and Hulkenberg are next to switch to the softer rubber. The Mexican improves from 16th (44.155) to 12th (43.424). It had been predicted that the difference between the two compounds could be as much as 2s.