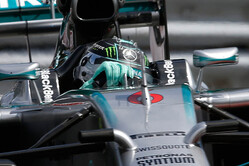 In the last few minutes Marussia has announced that Max Chilton will be its sole representative this weekend, the team opting not to run a second car out of respect for Jules Bianchi.

It is fair to say that the Frenchman's horrific accident at Suzuka last weekend has completely overshadowed the paddock in Russia... and far beyond.

The paddock still in shock, every driver and car is sporting a tribute to the young Frenchman who remains in hospital in Japan, in a critical but stable condition.

Alexander Rossi, who was provisionally entered by Marussia, is on the pit-wall.

Being a brand new circuit with new asphalt the opening session should see a few mistakes as the drivers struggle for grip.

The lights go green and Alonso is first out, followed by Hulkenberg, Raikkonen, Chilton and Grosjean. With the first three o four minutes all but the Mercedes duo has appeared.

A couple of drivers, Grosjean, Magnussen and Button, stay out for a second lap.

Back in the garage, the Marussia mechanics get to work on Chilton's car, their professionalism, under the circumstances, to be admired and fully respected.

Ten minutes into the session, Rosberg heads down the pitlane, the German followed by his Mercedes teammate shortly after.

Chilton, in the sole Marussia, splits the pair with a 46.835, the Briton under a lot of pressure this weekend.

As more and more drivers take to the track, Hamilton improves to 45.120, the Briton subsequently told to return to the pits so his brake vibration issue can be investigated. "We're not too happy about it," the world championship leader is told.

Perez, Rosberg, Hulkenberg and Sutil all make mistakes at T2. As do Ricciardo and Grosjean.

Button ups the ante with a 44.012 as drivers take advantage of the free set of tyres available in this opening half-hour.

Despite the increasing number of mistakes at T2, as Mercedes tweets; "it really is incredible how the drivers can go out there and within a few laps, look like they've been driving here for years!"

Bottas posts 43.542 to go quickest with Alonso posting 43.820 moments later, the Spaniard having a poor final sector. However, Button eclipses both with a 43.053.

As Button posts 42.507, Magnussen reports that he thinks he hit a bird.

At the end of the opening half-hour, it's: Button, Bottas, Alonso, Kvyat, Rosberg, Magnussen, Vergne, Perez, Massa and Hamilton. The Caterham duo, Ericsson and Merhi, have completed one lap each.