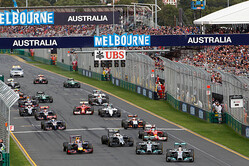 The Victorian State Government has revealed it subsidised the 2014 Australian Grand Prix to the tune of £34.11m, the largest contribution in the event’s nineteen year history. When combined with the 2013 Australian Motorcycle Grand Prix, the Victorian tax payer has contributed a total of £40.52m.

Announcing the results today, Tourism and Major Events Minister Louise Asher cited reduced ticket sales and increased costs for the Formula One event as factors in the £5.29m subsidy increase over 2013.

"The Australian Grand Prix Corporation tell me we can attribute the $2million approximate downturn in sales to the retirement of Mark Webber and again it's understandable when there's an Australian in the field that we get better sales."

Contradicting Asher's claim of a downturn in sales as a result of Webber's retirement from F1, and the fact the Minister is clearly not aware of Daniel Ricciardo, Australian Grand Prix Corporation CEO Andrew Westacott estimated almost 315,000 people attended the 2014 race, the second highest attendance in eight years.

Justifying the event, the government claims it contributes £22.18m in economic benefits, and another £19.91m worth of media coverage for Melbourne and Victoria.

Formula Money suggests the Australian Grand Prix is about the seventh most expensive on the calendar, costing an estimated £21.6m for the rights to stage the event. Last month it was announced the Formula One Grand Prix would continue in Melbourne until at least 2020.