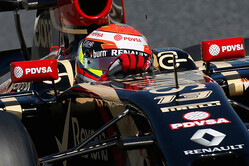 Talking to the Independent at the weekend, Lopez, whose private equity firm Genii Capital controls Lotus, said: "We support Lotus with debt, not sponsorship like the other big teams”.

Whilst claiming that much of the talk of the team's financial situation is the result of "smear campaigns", Lopez admits that Lotus is in "discussions to bring new partners to support its development” and is “notably in discussion with several parties for a long term title sponsorship.”

This, of course, follows last year's claim that investment group Infinity - which later changed its name to Quantum - had bought a 35% stake in the team. Despite repeated assurances from Quantum boss Mansoor Ijaz that the deal had been completed nothing more was heard and eventually a 10% stake in the team was sold to Russian telecoms company Yota Devices.

Whilst the recruitment of Pastor Maldonado has seen Venezuelan state oil company PDVSA add to the team's coffers - the 29-year-old having recently re-signed for 2015 - on-track performance this season has been poor, the Enstone outfit currently eighth in the standings.