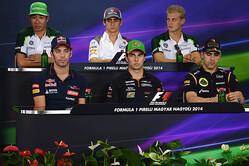 Marcus can I start with you? Ten races into your first Formula One season, what have you learned about yourself and about your own racing, your own capabilities over these first 10 races?
Marcus Ericsson: Obviously coming into Formula One there's a lot to learn. I think this year it's been a bit special as well with the new power units. For sure, the management of tyres, of energy during the races is something you've got to learn quickly, I think it's not only for me but for everyone else as well. To be consistent over a race weekend; important steps during a whole race weekend and you need to be always be consistent in both the driving and the feedback to the engineers. So it's quite a lot of things but I feel like I'm taking steps all the time and learning so that's the main thing.

So it's a work in progress, there's more to come?
ME: Yeah, definitely.

Now, there's been quite a lot of speculation at Caterham. How do you feel about your own position? Do you feel comfortable for next year as well?
ME: I feel good. I think the new owners are pushing really hard. Obviously they want to update the car during the season and keep doing that and that's really positive for all of us. Hopefully now, in the second half, we can have a stronger car and we can be a bit more competitive and fight with the guys in front of us.

Esteban, you've been on the cusp of points, very close to points a few times, 12th in Australia. How close are you to getting into the points, or have you gone as far as you can with this car, is it not possible to go any further?
Esteban Gutierrez: At the moment we are doing our best, all the team are pushing really. Without bringing updates we don't see it very different to what we had in Hockenheim. But it seems that step by step, every race we've been closing the gap a little bit and that is putting a lot of hope and also motivation into everyone in the team. From my side I'm trying to do things as consistent as possible and trying to get the most of the car that I have at the moment.

Thanks very much, I'll come back to you in a moment with something else but we'll move on to Kamui. Kamui, a change of ownership at the Caterham and some uncertainty about what's going to happen there I guess. What can you do to strengthen your position and at the same time strengthen the team as well, because you've been around a bit, you know exactly what's required or a driver and you can gather the team yourself and be a bit of a team leader.
Kamui Kobayashi: Yeah, hello everyone. First of all, I was quite having these changes during the season with a new owner, but I think this is what we need, otherwise I think we couldn't finish the season. It was the right move and straightaway I think… I mean, team, does it affect them a lot? As you see it in the news I think people left, quite a lot, straightaway, but I think we need to keep motivated because I think if we want to survive we need to change something. I think this is the right thing. I need really hope. Of course, it's the same from my side. I think I need to always drive 100 per cent. This just gives motivation. The biggest things… if we want to change something, we need to change the biggest things not the small things. We have new guys coming and many people left, but I think we have responsible in each part and this is going to help everybody and let's see what happens.

You're known for your attacking style of driving. Does this car allow you to attack as much as you'd like?
KK: Not really! It's not really happy but I need to hope that one day I'm going to make something, a really exciting race. Like a 'train' race is not really exciting for the spectators. I'm pretty happy last race, for example, at the German Grand Prix, we had a couple of pit stops and we saw some excitement during the race. But if it once again came back to one stop, for me it's not really nice to watch the race, I'm pretty happy. Pirelli had a nice tyre decision and think this makes more fun. Even my car... I think Pastor was like Prime and I was supersoft and I could overtake him. It was a little surprising but it's good it happens like that and it's good for spectators.

Jean-Eric, we know that the car is capable of getting into the points, and the qualifying is there as well. But you've had problems in various; well, what seems like different areas, I don't know if you would agree. Id it just one fix that is needed? What's basically the problem?
Jean-Eric Vergne: I don't think we really have any problems at the moment. The only problem we have is to get the points at the end of the race. Obviously the first part of the season has been quite competitive, but unfortunately I couldn't finish all the races - I think I had five DNFs, so that's quite a few, all the time when we were in a position to score points. So, I will take only the positive and the positive is that we have great people working in the team, working really hard to improve the reliability, and we've got a good car. It's not like if every time we had a problem we were not in the position to score the points. Now I think we just need to keep on working in the same way and the points should be there.

So what are the expectations for the second half of the season then?
J-EV: Ah, the expectation is to finish as many times in the points obviously. This is definitely possible. We have a quick, we still have some new updates to come. So I really believe in the team. I believe they can bring us a better car again and just to finish the races… in the points!

So you are confident that things will improve reliability-wise?
J-EV: Yeah, definitely. That's not really my big concern… I'm not concerned about it. I'm more concerned about the speed that we need to have every race weekend. And then from there all I have to do is drive this car as quick as possible and do the best job possible. Not thinking there will be a problem happening or not. It's not really in my mind.