Mexico returns to F1 calendar in 2015 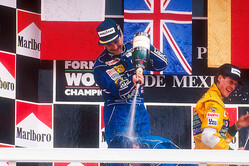 Bernie Ecclestone has confirmed that Mexico will return to the F1 calendar in 2015.

The event, which will be held at Mexico City’s Autodromo Hermanos Rodriguez, will be officially confirmed at a press conference on Wednesday morning.

Bernie Ecclestone first revealed the plan to bring F1 back to Mexico City in February last year in an interview with American motoring magazine Autoweek. It was subsequently confirmed by sources to Pitpass and has now become reality.

Confirming the news tonight, Ecclestone told Forbes, "we have got Mexico past the post."

The event's return has been driven by Tavo Hellmund, the driving force behind the return of the United States Grand Prix to the calendar and the construction of the highly-rated Circuit of the Americas in Austin.

Assuming the 19 events that comprise the 2014 calendar remain, Mexico's inclusion will take the 2015 calendar up to 20.

It is estimated that the annual hosting fee will be $30m, however Carlos Slim Domit, son of the world’s richest man Carlos Slim, has previously made it clear that he will not be bankrolling the event.

Interest in F1 in Mexico, which last hosted a race in 1992, has been revived by Sergio Perez and Esteban Gutierrez, whose careers have largely been supported by Slim as they rose through the ranks.