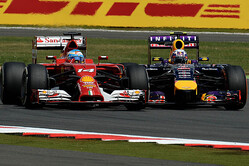 It's taken until almost the midway point of the season, but finally Glen 'Crompo' Crompton has given us his first real crack-pot conspiracy theory of the year... and it came about almost by accident.

Crompo is in the Pitpass studio once again, along with fellow antipodean Mat Coch and editor Chris Balfe to discuss the British Grand Prix as the team stray in to oncoming traffic in the form of Formula Kart Star,s the new FOM backed karting series.

Its very existence has the guys agreeing that it is a confusing move for a brand which up until now has been so aggressive in protecting its exclusivity, leading to the inevitable cynicism.

Crompo sees beyond the foggy press release to look at the very atypical announcement with a typically unique perspective, suggesting it is perhaps the opening salvo of a company looking beyond Bernie Charles Ecclestone.

Speaking of which, there is also speculation over Kimi Raikkonen's future in Formula One. Following his huge opening lap crash at Silverstone and the fact the Iceman has carried a back injury for much of his career, the team wonder if it might provide an easy opportunity for the world champion - and lawnmower racing maestro - to bow out of the sport. All of which leads to a discussion as to who might replace him at Maranello, prompting Balfe to suggest one driver from left field (or is it Leafield?).

Jenson Button's future is also discussed following a performance Crompo, in particular, rated highly, as the trio looks to get inside Ron Dennis' head as he looks to firm up McLaren's 2015 driver line-up.

Notable mentions go to Valtteri Bottas and the battle between Fernando Alonso and Sebastian Vettel, which Balfe admits left him yelling at the television. Coch meanwhile is busy suggesting the only people capable of beating Mercedes to this year's championship is Mercedes itself following yet another retirement and more lost points.

Running to 23 minutes - Coch having cynically cut Balfe's complaint about the increasing amount of control the technical guys have over the cars whilst they are on track - a huge range of topics is still covered in the team's trademark oblique fashion.