Bernie gets a new bodyguard 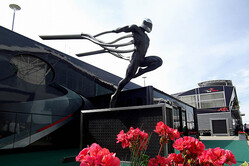 Eagle-eyed viewers of the British Grand Prix on the BBC and Sky at the weekend may have noticed a rather imposing new addition to the Formula One paddock. Sitting outside the motorhome of Formula One's boss Bernie Ecclestone was a huge statue which looked like it had come from a science-fiction movie about motorsport. Its origins are actually much closer to home.

The statue, known as 1carus, is made by British sculptor Tom Maley and is designed to show the importance of the drivers at the heart of F1. Evoking iconic motoring mascots, 1carus is a muscular helmeted driver in a running pose with his arms outstretched behind him like wings as he strides forward. Instead of having hands, huge stainless steel exhausts project from his arms with the tangle of pipes that supply them leading into his back.

It is the ultimate fusion of man and machine and, as many pointed out in the paddock, it is perhaps no coincidence that Ecclestone took a shining to the piece. It has eight pipes flowing from the body suggesting that it is designed on a V8 engine rather than the current V6s which Ecclestone has fiercely opposed.

The statue was photographed thousands of times over the race weekend and became a popular backdrop for television pundits. It also attracted luminaries and celebrities with the list of those photographed in front of it including supermodel Naomi Campbell, Rubens Barrichello, Toto Wolff, Niki Lauda, Singaporean billionaire Ong Beng Seng and of course Ecclestone himself.

Jackie Stewart was one of the many who insisted that the statue's muscular form was based on his own body. In fact, it is a product of Maley's imagination. He originally trained as a mechanical design engineer and in 1996 unveiled his first major civic work, a statue of 1950s footballer Jackie Milburn. Since then he has produced pieces for private clients including Ford, Jaguar and Newcastle United Football Club.

Maley suspected that the statue would appeal to F1's leading lights and contacted Pitpass' business editor Christian Sylt (pictured with Maley and Ecclestone) after reading about his close contacts in the industry. Last year Sylt introduced him to Ecclestone who asked if the statue could be displayed in the paddock during the British Grand Prix. It was an ideal match.

"F1 is the perfect platform as it features the world's best drivers and the most high-tech cars," says Maley adding that "1carus symbolises man's endless progression in motorsport."

With tweaks to the sound of the V6 still on the horizon, there is no doubt that progress and F1 go hand in hand.