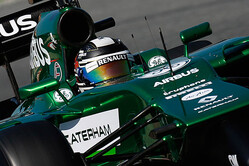 Newly installed at Caterham, Colin Kolles has warned that the team faces some 'tough love' if it is to survive.

Though he attended last weekend's British Grand Prix, his first time with the Leafield based outfit, he opted to keep a low profile, leaving Christijan Albers to be the new face of the team.

However, cornered by Reuters Alan Baldwin, he gave some insight into the enormous task he faces.

"I think we have made a lot of progress," he said. "There will be more changes, more things to be done. I prefer to have 200 safe jobs than 300 lost jobs," he adds, a clear warning that though investors have been found to step into Tony Fernandes shoes, some very hard decisions will need to be made and acted upon.

"Sometimes you have to make unpopular decisions," he admits. "But believe me, I think certain people know and understand that changes have to be done and that it cannot continue like this. It's impossible."

While many are sceptical about the whole Swiss/Middle East consortium story, convinced that it is actually Bernie Ecclestone who is propping up the Anglo-Malaysian team, Kolles was giving little away, other than the fact that it remains Anglo-Malaysian.

Admitting that the consortium is "private individuals from the Middle East with Swiss connections," he also confirms that he had no idea as to their identity.

While, understandably, Fernandes AirAsia logos were missing from the cars at Silverstone, Kolles says that in the short term this should not give cause for concern, though the only sponsor decals you’ll see on the cars from now on - including Roman Abramovich's Truphone - are paying for the privilege.

"I am not here as a charity," says Kolles. "What you see there is reality."

Whoever the new owners might be, Kolles says the team, as a company, is now debt free.

"A lot has been resolved within three days," he claims. "We still have creditors to sort out, who are normal trade creditors. This is what we are trying to do. To bring everything to calm waters.

"The team should be there for many more years. This is the target," he continues. "It's not a question of surviving or not surviving. I think the team will survive. The question is at what level? It's not only about sorting out creditors.

Other than the workforce, which he has admitted will need to be scaled down, there are the drivers Kamui Kobayashi and Marcus Ericsson, both having paid for the privilege. However, Kolles, who guided various incarnations of the Jordan team post-Eddie, and also the ill-fated HRT, is giving little away.

"In terms of performance we have to look into this. And we are looking into this," he says. "I don't want to spread rumours around because it makes no sense.

"I had meetings with the management and drivers. I think I am always transparent. The last driver I sacked out of Formula One was Christijan Albers. And he's my team principal. This should give you a taste of how I deal with people."