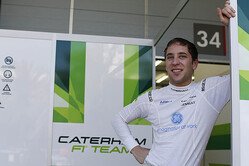 As we await official news from Caterham following that tweet, the team reveals that Robin Frijns will drive in FP1 this weekend.

Kamui Kobayashi: "The British Grand Prix is our second home race of the season and one everybody likes for many reasons! For the drivers it's a good challenge as it's one of the classic circuits, and the fans love it as there are so many F1 supporters in the UK. I am always amazed at how enthusiastic British motorsport fans are and I am excited about seeing them - It's one of the good ones.

"On track we're obviously aiming to pick up from where we were in Austria. I've been speaking to the guys at the factory a lot since they returned from Austria and we think that we can start with the good baseline setup on Friday. We've had a chance to look in much more detail at the data from Austria and know where we need to go to cut the gap even more and that's the goal. With the improved reliability we had at the last race, and the nature of the Silverstone circuit, I think it could be a good weekend for us. Whatever happens, I'm sure the fans will enjoy every second, and our aim is to give those in green something to cheer for."

Marcus Ericsson: "Next it's my first British Grand Prix as an F1 driver at one of the great circuits of the season, Silverstone. I understand it's the 50th anniversary of the race this year and there's obviously so much history about the place - honestly it'll be an honour to race there in its 50th year and I'm sure it'll be a special weekend for everyone taking part.

"I've obviously raced at Silverstone many times before - I was on the podium back in 2011 in GP2 and one of the things that really makes Silverstone stand out is the fans. It's like Austria was last week, and Germany and a few other races - it's packed right from Thursday morning until late Sunday night and that makes an amazing atmosphere. The British fans are among the most knowledgeable, passionate fans anywhere, and they absolutely love F1, whatever the weather!

"For us this is another chance to keep fighting back against our nearest rivals and after we made some progress in Austria we want to pick up where we left off. Silverstone should actually suit the car better than Austria as we've been working on improving further the setup that allows us to maximise the aero package, and at a track like Silverstone, where aero performance is crucial, we're aiming to build on the step forward we made in Austria."

Robin Frijns: "I'm back in the 2014 car for the first time since Bahrain and excited about getting back in the cockpit and helping us make some progress again, and seeing how the car has developed since early April. I was in our 2010 car a couple of weeks ago at the City Racing event in Kazan, Russia, and that was cool, but the real work is in the current season car in an official session and that's what Friday morning is all about. The last few races have obviously been pretty tough for the team, but we clearly made some progress in Austria and we think we can do the same again at Silverstone, a track where we should see more from the setups we ran on Saturday and Sunday at the Red Bull Ring. Hopefully the weather will be good, not something that you can ever guarantee in England, but with us being able to use two sets of tyres in FP1 sunshine will help us get the most out of the session, for me and the whole team."

Main challenges of Silverstone for the Power Units: "The high percentage of wide open throttle. Over 60% of the lap is taken at full power, with a stretch of almost 25secs from Copse to Stowe taken flat out. The ICE and turbo will be working at their max while the MGU-H will be recovering energy to feed to the battery or MGU-K for use later on."

Main energy recovery points: "The Wellington Loop is the best opportunity for the MGU-K to recover energy under braking. Village is a slow second gear right hander taken at around 110kph, while The Loop is the slowest corner on the circuit. Also taken in second gear, the drivers will slow down to around 90kph. Vale, the last corner, is also a big stop. Drivers approach at high speed, typically around 280kph, but will brake down to under 100kph. Energy recovery is therefore relatively simple compared to Austria and Canada where there were few corners."

Difficulty rating: "Silverstone will remain a power track thanks to the long periods of acceleration, but good traction from the Power Units is important through the complexes, both high and low speed. In this respect having a good overall package is more critical than good top speed."

What to watch out for: "The Hangar Straight is approx. 875m so we should see speeds of well over 310/320kph before the braking point for Stowe. It will also be spectacular to watch as the cars slide under braking with the decreased grip and increased torque."