Caterham: The silence is deafening 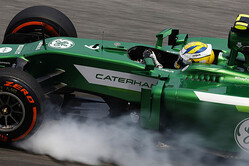 It is now over 72 hours since Tony Fernandes mysterious tweet... but still no official follow up or explanation.

There has long been talk that Brackley was cursed, and while Brawn went some way to ending such talk Mercedes appears to be on its way to putting it to bed once and for all.

Therefore, for those that way inclined, one has to wonder if in fact it is the Leafield Technical Centre that has doom written all over it, what with the fate of Arrows, Super Aguri and now, seemingly, Caterham.

Since that strange tweet on Friday morning radio silence has been strictly maintained, and though there have been reports of an official announcement before the weekend and talk of a Middle-Eastern (who else?) buy-out, the only word coming out of Leafield is that Indonesia’s Rio Haryanto will drive on the second day of next week's test and Will Stevens on the first.

Sadly, the lack of any official comment, be it confirmation or denial, from Leafield will only lead to more media speculation, all of which will be extremely worrying for the outfit's workforce.

Whatever the future might hold, whoever might take over, it might be an idea to consider an alternative HQ to Leafield, or at least consider an exorcist.