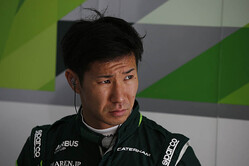 Kamui Kobayashi: "My start was ok and I managed to avoid all the debris from the Marussia crash on lap one. The tyre management under the safety car was pretty good, but then a couple of laps after it came in I felt a problem with the rear coming out of turn two and had to stop the car. When I got out I had a look and I could see it was a rear suspension problem, so that was that.

"We've had a pretty hard time in Canada but we'll continue to fight. Our day will come, I'm pretty certain about that, but it wasn't to be this weekend in Montreal, so we'll have a look at everything we've learnt this weekend back at the factory and go to the next race in Austria ready to fight again."

Marcus Ericsson: "A disappointing end to a difficult weekend, but for me it's all part of the learning curve. As soon as the formation lap started I could feel that the Power Unit wasn't pulling hard in any gears and that continued under the safety car. The team tried to fix it but there wasn't anything we could do and as soon as the safety car came in I was told to retire and that was the end of the race. When I got the car back we found out the problem was with a pipe connected to the turbo, not the Power Unit itself, and we had to retire to prevent any damage to the engine. Obviously that's not how we wanted to end the race but we'll regroup and keep pushing."

Cedrik Staudohar, Renault Sport F1 track support leader: "After the start we could see the turbo speed on Marcus' car had greatly increased, indicating a leak in the intake system somewhere. The team will investigate why but we had no choice but to retire to save the Power Unit from damage. Kamui then stopped soon after with a suspension failure, bringing the weekend to a very disappointing conclusion."