Caterham pulls out of Barcelona test 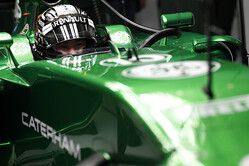 Caterham has pulled out of the second day of testing at Barcelona following Kamui Kobayashi's crash on Tuesday.

In a brief statement issued an hour before today's session was due to begin, the team said:

"Having assessed the damage to chassis CT05-#03 after Kamui’s accident yesterday in the final half hour of T05 day one we have decided not to run on day two.

"While obviously not ideal, this ensures the team can now focus on the next Grand Prix in Monaco, starting next week."

Robin Frijns was due to take over driving duties today.