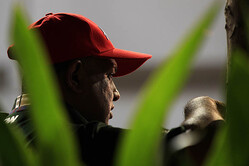 "Caterham F1 Team is pleased to confirm that Tony Fernandes and his partners have sold the team to a consortium of Swiss and Middle Eastern investors, advised by former F1 Team Principal Colin Kolles.

Under the terms of the sale, the team will continue to race as Caterham F1 Team and will remain based at Leafield for the foreseeable future.

The new ownership takes charge with immediate effect. Former F1 driver, Christijan Albers, assisted by Manfredi Ravetto, will take over the day-to-day running of the team, reporting directly to the board and replacing Cyril Abiteboul who will leave the team to pursue new challenges.

"We are aware of the huge challenge ahead of us given the fight at the bottom end of the Championship and our target now is to aim for tenth place in the 2014 Championship," said Albers. "We are very committed to the future of the team and we will ensure that the team has the necessary resources to develop and grow and achieve everything it is capable of."

Ravetto was previously the Director of Business Affairs (don't go there) at HRT, which like Caterham entered F1 in 2010 lured by the promise of a cost cap that would go some way to levelling the playing field.

Just months into the team's first season majority shareholder Jose Ramon Carabante, who had taken over from Adrian Campos, the driving force behind the original project, was replaced by Colin Kolles.

In late 2011, as the team morphed into Hispania, it was announced that Kolles was leaving as the team continued its restructuring process. The team left F1 at the end of 2012, its best result being a 13th for Tonio Liuzzi in Canada in 2011.

In recent months, Kolles has been linked with a Romanian F1 entry spearheaded by the country's former Health minister Ion Bazac. A physician and politician, Bazac, who served as Minister of Health between 2008 and 2009, is also Romania's Ferrari importer.

According to unconfirmed reports, last month the FIA is said to have approved Bazac's entry in the 2015 world championship, though nothing has been heard since, either from the FIA or the Romanian.

Albers contested 46 Grand Prix between 2005 and 2007 with Minardi, Midland and Spyker, the latter two teams being descendants of the former Jordan F1 team - which eventually morphed into Force India. Kolles was team principal at both Midland and Spyker.

His best result was 5th in the 2005 Unites States Grand Prix, which, as you will remember, only saw six cars start the race.