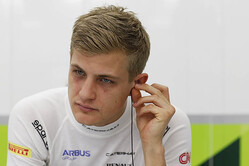 Kamui Kobayashi: "After the rain on Friday night we started FP3 on wets but after the installation lap it was clear the track was ready for inters. We went out early to see how they were performing and found we had some traction issues, but otherwise the car was ok. As the rain had started to fall again we then waited out most of the rest of the session before going out with a few minutes left on another set of inters to run to the flag.

"In Q1 I went out early on a set of inters but after a couple of laps it looked like we could try slicks. We boxed and went onto a set of options but soon after going back out on track I was told to box again because of a problem on the car. We made a couple of adjustments and went back out for another run on options but I had the same technical issue and couldn't go any quicker. It's obviously a shame because today was one of those sessions where we could have had one or both cars in Q2 but it wasn't to be."

Marcus Ericsson: "FP3 started wet but the track conditions were ok so we did the first full run on inters. During that run the rain started coming down again, particularly in sector two where it was pretty wet, so we boxed and waited with most of the other cars for the rain to stop before going out again on wets for the final few laps.

"In quali we went out with most of the pack on inters and then made the call to go to options pretty much as soon as I was back in the garage. The conditions were pretty critical and I made a mistake in sector two when I was really pushing - after that I couldn't recover the time and we ended up where we are. Tomorrow the conditions look like they'll be similar to today and we know that could give us opportunities, especially with the cars that will be around us on the grid as I'm sure they'll all be pushing hard right from the start - we need to be there when it counts so we'll work as hard as we can to make sure we are."

Cedrik Staudohar, Renault Sport F1 track support leader: "It wasn't really our day today. We had hoped to be able to take advantage of the weather but unfortunately on Kamui's car we had an issue with the ERS system on the second run. After a reset it appeared to be OK but then we encountered another problem - effectively the engine behaved as though it was still in the garage and stopped out on track, which meant the end of the session for Kamui. Marcus had a difficult session but no particular engine issues so now we are looking forward to tomorrow's race, where we hope for better luck."