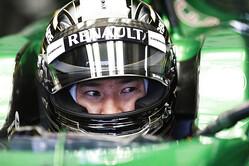 Robin Frijns: "I did the installation lap and, except for a very minor issue with the radio, there weren't any problems with the car. However, whilst waiting for the post-installation lap checks to be completed we found an electrical issue that was causing a misfire in the Power Unit. We had to take the floor off to fix it but the guys did a great job and with about 15 minutes left in the session I was back out for the baseline run.

"While it would obviously have been good to have the whole session, we did at least complete a few laps - sometimes it's like this in motor racing. Hopefully that's our bad luck out of the way for this weekend!"

Marcus Ericsson: "FP1 went ok. We started with the usual installation lap and the first thing that was clear was just how low the grip levels were, even for an install. That continued on the baseline run where the front tyres were really struggling to come up to temperature - overall the car balance was ok, but for run two we worked more on generating higher initial tyre temps which meant we could start looking in more detail at setup options.

"My second run was a bit better but on the final lap I span around turns 12 / 13 and couldn't get the car back out of the gravel. That cost us quite a bit of time but as soon as we had the car back it was turned around quickly and we were back out for a final couple of laps.

"In the afternoon we started with a car that felt like we'd maybe gone the wrong way on setup so we made a few changes at the end of the first run and it was definitely better for the second run. We then went onto the mediums and they were working pretty well – the grip levels were much better and the tyres came up to temperature more quickly, but then on the third run I had a mechanical issue which meant I lost power and had to pull over in the old pits. We'll need to make a proper assessment of what happened and to go through all the data tonight and then aim to keep improving tomorrow ahead of quali and the race."

Kamui Kobayashi: "Having sat out FP1 it was important to get as many laps done in FP2 as possible and having done that with 31 laps I think we made some good progress in the session.

"Overall the balance wasn't too bad at the start of FP2 – the car was quite snappy and there was too much understeer, especially in the high speed corners, but by the end of the session it was improving. We did a couple of runs on the hard tyres, then onto the mediums for our first assessment of the softer compound and it was a definite improvement, both on the short and long runs, so that's quite positive for the rest of the weekend."

Cedrik Staudohar, Renault Sport F1 track support leader: "Unfortunately we had a lot of issues today. After the install lap on Kamui's car we saw there was no pressure in one cylinder which we subsequently traced to an electrical problem. We also adjusted the ignition settings to correct. Then in the afternoon we had a problem related to the throttle but we were able to run to get as much information as possible. On Marcus' car we had an issue with the exhaust this afternoon so we will check both engines thoroughly and run through some more tests to ensure everything runs correctly tomorrow."