Maldonado stays with Lotus in 2015 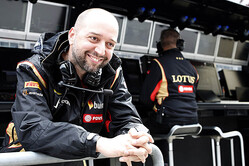 Lotus Co-Chairman and Team Principal, Gerard Lopez, has revealed that Pastor Maldonado will remain with the team in 2015.

In an interview for his team's website, when asked about the line-up for 2015, Lopez said: "I don't want to give too much away, but as it's half way through the season I can confirm 50% of our driver line-up for 2015 as Pastor is with us for next year.

"Despite the difficulties we've had so far this season," he added, a master piece of understatement seeing as the Venezuelan has yet to score a point, has been excluded from qualifying twice and his best result is a twelfth in Austria. "He recognises our true potential as a team and we recognise his true potential as a driver. We will achieve great things together."

Asked for a 'mid-term' report, Lopez admitted: "Clearly, we're not where we want to be and this year has certainly presented us with many challenges. Performance-wise we continue to struggle and in terms of reliability we haven't been great either.

"They say you learn more from adversity and I can confirm we've learnt a lot this year. This is sometimes the nature of this highly competitive sport and we won't stop fighting until we're back where we want to be.

"There's been a change in the order with the new regulations and in terms of results we have been hit pretty hard," he said, in terms of the 2014 regulation changes. "There are many reasons for this and every aspect of the causation is being tackled. The attitude at Enstone is not one of finger-pointing and dwelling on issues, but rather one of positive action to improve the situation. We are taking several steps to make us stronger for the future."

Whilst some appear to have benefited from the absence of FRIC systems, others have lost out, Lotus, seemingly, more than most.

"On top of our season to date, this weekend we've had to remove our interlinked suspension system," he said. "This was a very clever piece of engineering, which originated in Enstone and something the team has used for a long time. It's been emulated by many other teams. Unfortunately, the situation now is that we can't run this anymore so we just have to adapt. It's another challenge and one we are meeting head on.

"We do have some great things to come," he concluded, "but it's important that the team is not stopping developing this year's car as there is still a lot we can learn; we are going to fight hard for every point we can achieve this year. Looking forward, we have been able to take steps to ensure that 2014's lessons have been learnt and we get back to where we want to be in 2015 - fighting for podiums.

"When we look at the team's recent history we can see what is possible. In 2011 our car followed a unique development path with the forward facing exhausts. This concept didn't give us the results we wanted but look how we bounced back in 2012 and 2013! Our 2014 car hasn't given us the results we've wanted, so watch this space in 2015 and beyond!"