Ecclestone says he is coming after his critics 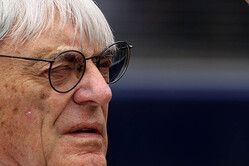 If anyone is in doubt as to whether Bernie Ecclestone is firing on all cylinders after spending three months in court then they should think again. Not only is the Formula One boss back at work full-time but he has fired off a warning shot to his critics according to an article in the Independent by Christian Sylt.

Earlier this month Ecclestone paid a staggering £60m to prosecutors in Germany to put the brakes on charges that he paid a bribe to steer the sale of F1 to his preferred buyer, the private equity firm CVC. The trial was being held for two days every week to allow Ecclestone to continue running F1 at the same time and his lawyer Sven Thomas said that it had become "extremely burdensome."

"Now I am in a position where I have got a little bit more time and I shall follow my old idea in life, 'don't get mad, get even'. I haven't got mad but I'm going to get even," says Ecclestone.

He says that high on his (hit) list is Dieter Hahn, a German businessman who is on the board of media rights company Constantin Medien. Last year it sued Ecclestone in London for allegedly undervaluing F1 by engineering the sale to CVC rather than a higher bidder. In February Constantin lost its case but it is appealing the decision.

By settling the trial in Germany Ecclestone preserved his innocence and the judge Peter Noll said that "the charges could not, in important areas, be substantiated." In a statement, the court added that "prosecution of the accused due to bribery is not probable as things stand." It claimed that after hearing the evidence so far, "the court did not consider a conviction overwhelmingly likely from the present point of view."

The comments came after the £60m had been paid to prosecutors and Ecclestone said afterwards that he was "a bit of an idiot" to settle. However, on reflection, he says that "the prosecutors didn't know the judge was going to come up with that. They don't talk to each other at all."

Noll said that the enormous settlement sum had nothing to do with the events in the case but instead stands in relation to the wealth of the accused. "Let me tell you something, the system is quite good as it happens because if somebody is in trouble and is earning $5,000 a year it is a bit different to somebody who is earning more. I think it is a good idea," says Ecclestone.

He adds "they didn't make me pay 100 million. I agreed to pay. I didn't have to pay. I decided to pay it." The prosecutors approached Ecclestone about settling after the trial had been underway for three months and he says it couldn't have taken place sooner.

"It's not quite as easy as people portray. You don't just say 'here's a few quid.' It's a bit of a privilege. They have to realise that perhaps they haven't got a good case and provided that the prosecutors, me and the defence are happy then it's OK but up to then they just keep going."

The settlement stabilises F1's management and paves the way for CVC to sell its 35% stake in the sport. According to recent reports, possible buyers include Virgin Media owner Liberty Global, Disney and even Ecclestone himself. However, he is coy about whether a deal is on the horizon.

"Disney are a nice company. Nice people. Don't know who they all are now," he says. "Lots of people have looked at buying Formula One. Until they start looking at what they have got to pay it is coffee shop talk. I've no idea whether CVC are going to sell this year. I haven't got a clue. Whether I buy back into F1 depends what sort of situation arises but it's not a priority. I'm a bit busy at the moment and have got a lot of catching up to do."