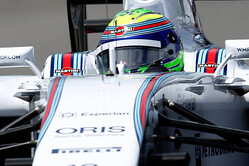 It's no surprise that Toto Wolff has to sell his shares in Williams. At the moment he has his finger in two pies as in addition to owning around 10% of the team he also has a 30% stake in its rival Mercedes and is an executive director of it. There is nothing improper about this but to prevent any accusations of conflict of interest Wolff has been looking for a buyer for his Williams shares. In June, American healthcare tycoon Brad Hollinger bought 5% from him along with an option to acquire more. The size of the option has now been revealed and is a 2% stake worth £3.5m according to an article in the Daily Telegraph by Christian Sylt.

"I sold some of my stake to an American entrepreneur called Brad Hollinger. I am now on slightly more than 10% and Brad has an option to buy another 2% so if I find somebody who is suitable maybe I will sell a little bit more," says Wolff.

Hollinger is not well-known in the world of F1. He made is money through a company he founded called Vibra Healthcare. It owns hospitals across the United States and Hollinger is its chief executive. Wolff says that he "is a shrewd business man, a racing fan and owns vintage F1 cars. He bought into Williams as a financial/fun investment. He does not want to get involved but he is bullish about Formula One's long-term business case."

The new structure leaves the team's co-founder Sir Frank Williams with 52% of its shares whilst 10% is in the hands of his business partner Patrick Head and 16% is split between Wolff and Hollinger. The remainder is listed on the Frankfurt stock exchange where Williams floated in 2011.

To date, it is the only quoted F1 team and Wolff was one of the driving forces behind the flotation. However, in 2013 he was poached by Mercedes and now seems set to steer the team to the championship this year. Nevertheless, he still has his eye on the best interests of Williams where his wife Susie is a development driver.

"I must sell the rest of my Williams shares but I have no time pressure. It must always be in alignment with the Williams family. I could have sold a couple of times but you don't want some crazy billionaires in there and then the family. Actually I am in no rush but the mid to long term target is to reduce the stake further."

Williams has not won a race in the past two years but it is an attractive investment opportunity. It is the second-most successful team in F1 and has won nine championships since it was founded in 1977. Although it finished a lowly ninth in the standings last year, with just five points, its performance has accelerated since then.

Williams currently lies in third place with 177 points and at the weekend leapfrogged Ferrari in the constructors' championship. It now sits ahead of the Scuderia and Williams' better-funded British rival McLaren.

Clearly its fortunes have been boosted by a number of appointments, not least Rob Smedley, Pat Symonds, Jakob Andreasen, Craig Wilson, Rod Nelson and Sir Frank's 38 year-old daughter Claire as deputy team principal. So far this year the team has achieved five podium finishes out of the thirteen races contested.