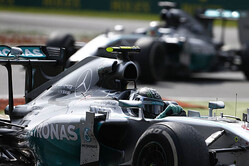 Nico Rosberg has dismissed suggestions that he deliberately made a mistake in order to 'gift' teammate Monza win.

The German made two unforced, and uncharacteristic, mistakes during yesterday's race, both at the notorious first chicane. The first came just a few laps into the race whilst leading comfortably, the second whilst under pressure from Hamilton.

Both times the German got the chicane entirely wrong and had to take to the escape road, weaving through the polystyrene markers. Though both incidents cost him precious time, the second cost him the lead also.

Post-race, sections of the media, clearly deprived of a 'Spa-style' incident in which the Mercedes drivers clashed, instead focussed on Rosberg's mistakes, suggesting that 'gifting' the win to his teammate was either part of his official punishment from the team for Spa or his own personal bid for atonement.

Asked the cause of the mistake which saw him lose the lead, the German joked: "It wasn't my mistake, it was the other guys' fault... I'm just kidding! It was just Lewis was quick, coming from behind. I needed to up my pace and then as a result just went into the mistake. That was very bad and that lost me the lead in the end."

Pushed a little harder by the sceptical media, he continued: "Spa is behind me. I put it behind me before the weekend. In today's race, just came to the mistake because Lewis was fast from behind. That's it. There's nothing unusual or anything. And me not being downbeat, I am very, very disappointed inside. But there's no point now to go hanging mouth down and things like that. It's still a one-two for the team and that's a great day. It's not a disaster, that is a fact."

"It's not like other races we have seen from Nico," he admitted. "He rarely makes mistakes. Two today and in the same place."

The Austrian also downplayed TV images of him smiling when Hamilton took the lead from his teammate.

"I feel like Big Brother is watching you, I will hide in the engineering office next time!" he laughed, again. "No, there was a smile, it was when the two were closing on each other and it was a smile that said: 'Here we go again in a close battle.'"

"It's not live," he added. "Whenever the camera's with you, the signal comes later. So it wasn't synchronised with the picture."