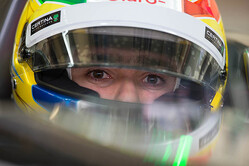 Sauber driver Esteban Gutierrez has been handed a post-race penalty for his clash with Romain Grosjean.

In the closing stages of the race the Mexican's Sauber was seen limping back to the pits with a right-rear puncture after coming off worse in a clash with the Lotus which saw him end up riding the unforgiving Monza kerbs at the first chicane.

However, there was worse to come for the Mexican who made three pit stops - on a day his rivals made just one - on his way to finishing 19th.

Having received a report from the Race Director, heard from Gutierrez and a Sauber representative and examined video evidence, the stewards deemed the Mexican collided with Grosjean at the first chicane, an incident as defined by Article 16.1 of the FIA Formula One Sporting Regulations.

Though the stewards accepted the explanation of the team that Gutierrez was experiencing brake problems the Mexican was handed a drive-through penalty, imposed after the race, in accordance with Article 16.3, which amounted to 20 seconds added to his elapsed race time.

The penalty saw him drop one position to twentieth, last behind Marcus Ericsson.