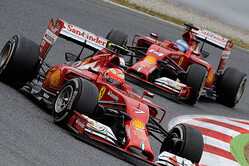 As the Italian team faces the prospect of finishing fourth in the Constructors' Championship, its worst finish since 2009, both Fernando Alonso and Kimi Raikkonen are the subject of increasing speculation.

The Finn, clearly not at ease with the F14T, appears totally unmotivated, his most spirited performance of the season, thus far, being in a lawnmower race ahead of the British Grand Prix. Meanwhile, his illustrious Spanish teammate continues to give 100%, consistently delivering performances that totally flatter both the car and the team.

Taking advantage of the anniversary of team founder Enzo Ferrari's death - which in 1988 came in the midst of a seemingly endless drought during which time (20 seasons) the team won just three (constructors') titles - Montezemolo sought to end the speculation.

"We are lucky to have two great champions, who are working with the whole team to get back to being competitive again," he told his team's website. "Of course, as is the case every summer, there is unfounded gossip about alleged problems with senseless rumours bandied about, such as the ones relating to Alonso's contract or those of drivers' salaries.

"We know that the summer heat always produces silly stories," he added. "Our drivers must now relax in order to return in top form. The season is still long and we need Fernando and Kimi to be in great shape."

Of course, there is also speculation in terms of Montezemolo's own future, and while others fall on their swords one has to wonder how long, in light of the growing pressure from both the Italian media and the Tifosi, and with no real prospect of a Maranello revival in sight, how much longer the President can hold out.

"We are making in-depth changes on both the organizational side, in our approach and culture," he added. "We have taken important decisions and have made significant progress, even if, at the moment, the results of all this work are not always visible. The aim is to get back to being as competitive as we were before in the shortest possible time, while at the same time putting everything in place so that we can embark on another winning cycle."