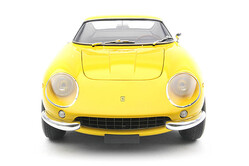 Amalgam Fine Model Cars has unveiled its Ferrari 275 GTB/4, another stunning example of its work at 1:8 scale.

The 275 GTB/4 was the final 4 cam variant of the late 1960s V-12 Berlinetta and its collectability is increased by the fact that it was produced in a sparing quantity of approximately 330 examples. The model's rarity, ever-rewarding performance characteristics and classic good looks have made it one of the most celebrated grand touring Ferraris of all time.

Using digital scan data, and with the assistance of Ferrari, this 1:8 scale replica captures every detail and characteristic of the real car. Each of the models in this limited edition of 199 pieces is hand built by skilled craftsmen.

Introduction of the Ferrari 275 GTB/4 series at 1964's Paris Auto Show marked the beginning of an entirely new lineup of Ferrari road cars. The series was comprised of open and closed body styles, but now the coupe's look was clearly separate in character from the convertible's.

The closed Ferrari 275 GTB had an aggressive new berlinetta body. The '4' designation was derived from its revised cylinder heads with four camshafts that boosted its horsepower to 300 at a heady 8000 rpm.

Amalgam has chosen the 275 GTB/4 for its limited edition, but all of the 275 GTB variants are available bespoke for owners of a real car, with every detail of the owner's own car faithfully represented in the model.

This stunning car is modelled precisely and accurately at 1:8 scale and features opening doors, hood and boot/trunk.