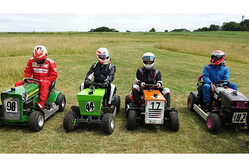 Sadly, the only real highlight of Kimi Raikkonen's Silverstone weekend was a lawnmower race in which he saw off Martin Brundle, Damon Hill and Anthony Davidson.

Starting from a lowly twentieth on the grid, having been caught out by the changeable conditions, the Finn was involved in a hefty first lap crash that brought the race to a halt.

Having announced just 48 hours earlier that 2015 will probably be his last season in F1 before retiring - to lawnmower racing based on the Sky F1 clip - some feel that the accident was another inevitable step towards the day when Kimi hangs up his helmet once and for all.

Gurmit, who, based on his impression of the facilities on offer or the crowd spacing, clearly hasn't been to Silverstone for some time, has his own theory.