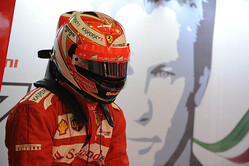 Kimi Raikkonen blames his team for the error which meant he failed to make it into Q2 today, leaving him starting the Hungarian GP from 17th on the grid.

In the final moments of the first phase of the session it appeared the Maranello outfit’s risky gamble not to send him out for another run had paid off, the Finn looking to have made the cut by the skin of his teeth. However, a late improvement by Jules Bianchi - who deputised for the Finn at the recent Silverstone test - saw The Iceman demoted to the drop zone.

"The plan was to go out, but the team said 'no, you are fine, you do not need to go out'," he told reporters. "I questioned it a few times, but they said no need, and we can see the end result.

"A mistake has been made," he added. "It's already been a difficult year, so I don't see the point to shout. The mistake is done."

An attempt to get an explanation from team boss Marco Mattiacci was met with a terse "no comment" however, Pat Fry was a little more forthcoming. "We Kimi we were caught out by the evolution of the track," he admitted. "It's very disappointing not to have got through with him because he's been going better this weekend."

"It's going to be difficult," added Raikkonen, "because there's not much chance of overtaking here. We definitely made a mistake, but now I only want to look ahead. Tomorrow, even if it will be tough, we will do our best to try and move up the order."