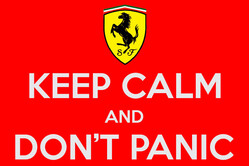 Despite the initial promise of its new upgrades, ultimately Montreal proved disappointing for Ferrari as the team comes under increasing pressure from rivals.

However, fearing panic may well set in, new team boss Marco Mattiacci has effectively sent out the 'keep calm' message to his troops.

"We are very angry with ourselves," admits, "but we have no intention of giving up. The Canadian circuit definitely didn't suit us, given that it highlighted the strong points of some of our competitors and, on top of that, not everything went right either, given that we started from too far back and the others improved more than we did.

"On the positive side of this weekend, everyone wants to fight back, starting with our drivers, Kimi and Fernando, who are both extremely tenacious guys, competent and competitive and they know how to work as a team to point us in the direction of the areas that are a priority in our development programme. Some updates produced good results on track and that's why we will continue down this path race by race.

"We have improved since the start of the year, but every step forward we make must be looked at in the context of what our rivals have done," he continues. "Ferrari has begun work on a specific approach, based around a few key figures; President Montezemolo, James Allison, Fernando Alonso, Kimi Raikkonen and a group of highly talented engineers. It's a case of restructuring the team, with people being given the best possible conditions in which to get the job done.

"There is a clearly defined development programme that we are working through and which will see us bring updates to every race," he concludes. "Another major target is to speed up our reaction time, which is something our competitors seem to manage to do."