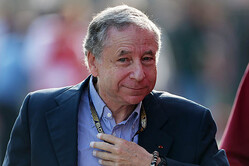 FIA president Jean Todt has ruled out any chance of a budget cap being introduced in 2015 and will instead need to reduce spending by means of the regulations.

With a number of the current teams struggling financially, and the hope of budget restrictions enticing new teams to enter the sport, the teams that form the Strategy Group - which comprises Ferrari, Red Bull, McLaren, Mercedes, Lotus and Williams, not forgetting the FIA and the commercial rights holder (FOM) - have killed off the idea.

"I understand that all the teams that are part of the strategy group are against the cost cap now," Todt told reporters in Bahrain. "So clearly, if the commercial rights holder, and if six teams are against, I cannot impose it. It's mathematics. In this case, no more cost cap.

"In a way I am disappointed," he admitted, "because it may be more difficult to achieve the reduction which I feel is needed. But everyone says we are all in favour of reducing the cost, and through sporting regulations."

In spite of the financial problems facing many of the teams, it was the raft of regulation changes this year that drove costs ever higher, and with talk of further changes to appease circuit owners, fans and those teams currently not doing so well, further regulation changes will mean more costs.