A treble for Maldonado 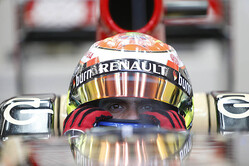 Pastor Maldonado has been hit with a three-part penalty following his clash with Esteban Gutierrez during today's Bahrain Grand Prix.

The Venezuelan, who had just left the pits, T-boned the Mexican as he carried too much speed into the first corner, the Sauber being flipped over in a heart-stopping accident.

The Stewards, having received a report from the Race Director, and examined video evidence, found Maldonado to have caused the collision, a breach of Article 16.1 of the FIA Formula One Sporting Regulations.

Having already handed him a 10-second drive through, they also deemed the incident warranted a drop of five grid positions at the next Grand Prix (China) and 3 points on his licence.

"We will need to have a look again at what happened as Esteban seemed to be off his line coming into turn one, maybe he missed his braking point," insisted the Venezuelan after the race. "I don't know, and by then I was in the corner with nowhere to go.

"For sure it's difficult to understand and I was coming out from the pits and with cold tyres. I think he was very unlucky, it’s good he jumped straight out of the car."

"I was completely surprised that Pastor ran into me," said Gutierrez, who was taken to the circuit Medical Centre as a precaution. "I was clearly in front of him. I turned into the corner and I was suddenly hit and I rolled over. There was nothing much I could do."

Elsewhere, Jules Bianchi, who was deemed to have caused a collision with Adrian Sutil, also in Turn 1, had to serve a drive-through and had 3 points put on his licence, which already has 2 points on it.