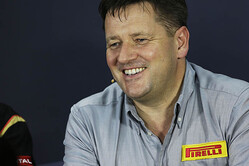 Tyre strategy was central to one of the most closely fought grands prix in recent history, with a thrilling finale set up by a safety car when there were just 10 laps left to go.

After the restart, Mercedes driver Lewis Hamilton led on the medium tyre from his team mate Nico Rosberg, who used a different two-stop strategy to finish the race on the faster soft tyre. Despite having a tyre that was theoretically slower, Hamilton was able to hold off Rosberg - who set the fastest lap - to take back-to-back victories. Similar battles took place throughout the top 10, with drivers on faster compounds battling against those in front on slower tyres, depending on the strategy they had selected.

However, a gap of more than a second between the P Zero White medium and P Zero Yellow soft tyre in the heat of the day was reduced considerably in the cooler conditions of the evening, as track temperatures dropped by three degrees during the 57-lap race.

The top six all adopted a two-stop strategy (some helped by the safety car) with the Red Bulls of Daniel Ricciardo and Sebastian Vettel using different tactics to finish fourth and sixth from 13th and 10th on the grid respectively. Vettel was one of just two drivers to start the race on the medium tyre.

From Tuesday, the teams will embark on the first in-season test of the year. Under the 2014 regulations, each team must dedicate one of their in-season test days to tyre testing for Pirelli. On Tuesday, Caterham will test for Pirelli, followed by Mercedes and Williams on Wednesday.

Paul Hembery: "We've seen some fantastic wheel-to-wheel racing in Bahrain, in which tyre strategy and pace management played a definite part. With track temperatures falling, some teams altered their strategy from three to two stops. When you have a safety car close to the end and drivers on a wide variety of different tyres, it always guarantees an exciting finish. Now we start preparing for the first in-season test of the year. Having the opportunity to test for the future with the current generation of cars is something we certainly welcome, so we look forward to seeing what we can get out of it."