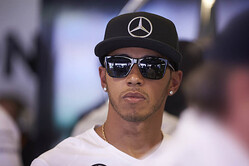 Amidst growing criticism of F1 2014 - at least from some quarters - Lewis Hamilton has leapt to its defence.

The fact that 83% of those that took part in a survey on Ferrari's website found the new look formula to be disappointing won't come as too much of a surprise to those that feel the Italian team - currently third in the championship and already admitting it has its work cut out - doesn't take kindly to losing, the legendary multi world champions still in shock at losing successive titles to an energy drinks manufacturer.

Company president Luca di Montezemolo, who was already critical of the new rules before the season had even begun, has met with Bernie Ecclestone to raise his concerns with a follow up meeting scheduled to take place with the F1 supremo and FIA president Jean Todt in Bahrain this weekend.

However, one person who sees nothing wrong with the new formula, feeling that most of the complaining is coming from teams and drivers (and their supporters) who are no longer dominating, is Lewis Hamilton, who is hot favourite for victory this weekend.

Referring to fans complaints about the new look F1, he said: "Karts are the best races to watch because you get to see such natural talent because everyone has the same kart and similar engines and you get to watch a train go round, with overtaking from corner to corner. Formula One is different. It has different technology, is a different competition, we're in a period of time when technology is everything, and the fact Mercedes has developed better technology than everyone, have generally done a better job this year...

"Red Bull have had the best car overall but now it may change this year," he continued. "That's a positive, it needs some time before you judge this season."