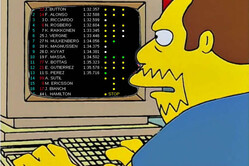 In a shock move, F1's powers that be appear to have bowed to public pressure after widespread criticism of changes to the way live timing information is now given to the public.

Days before the start of the season opening Australian Grand Prix, the official F1 Live Timing App was given a surprisingly low-key launch.

However, the reason for the softly, softly approach soon became apparent. Initially the app was only available for the Apple IOS (6 and above), and while an Android version did become available over the Melbourne weekend it was only usable with version 4 and above. Furthermore, it was only available in certain countries due to the (ahem) "tax laws".

At the same time, and in a move which surely only the most gullible would fail to see as a cynical attempt to extract money from fans ahead of the most anticipated season in living memory, the free app and live timing service on the (FOM owned) official website was stripped down to the bare minimum. Not only were the sector times replaced by meaningless coloured dots, there was no longer any info in terms of sector speeds, the number of laps or even the weather.

To make things worse, those fans that opted to buy the official app, assuming it was compatible with their devices and that they lived in a country where it was available, found it to be unreliable and buggy.

Throughout the Malaysia Grand Prix weekend Twitter was awash with complaints about the app which, though, contrary to earlier reports, is still produced by Soft Pauer, is now essentially an F1 in-house product, made available, as it is, by Formula One Digital Media.

To be fair, some users have had a good experience of the app and are complimentary, especially as it is a third of the price it used to sell at however, for the majority - including Pitpass editor Chris Balfe who was forced to but a new Tablet - the app has been something of a let-down.

Aware of the negativity certain aspects of the free live timing app will be back in place in time for this weekend’s Bahrain Grand Prix including sector times, weather updates, lap chart and sector speeds, whilst those fans who have forked out for the paid apps can either opt for a rebate or extend their subscription into 2015.

In a clear case of ‘if it aint broke don’t fix it’, not to mention an obvious decision to try and make money from its information, Formula One made a move without fully thinking it through. While the app might be all ‘bells and whistles’ on paper it should have been tested thoroughly before being put on sale, as one fan tweeted: "why am I paying so much for a beta version?"

Formula One has a well established track record of ignoring fans pleas, so perhaps this move signals a new phase in the relationship.

Rather than contacting Formula One Digital Media however, purchasers of the app should contact their respective vendor - the iTunes App Store or Google Play - quoting APP-F1-00L.

At a time when the sound of F1 is dominating the headlines, the sport's powers that be finally appear to have heard its core customers.