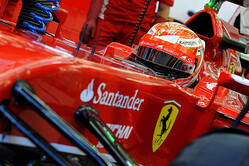 Fernando Alonso: Since the last test in Bahrain, we have made a big step forward in terms of the interaction between the electrical motor and the combustion engine. Everyone now has a better understanding of the rules, also for us drivers in terms of the driving style and how to manage this new Formula 1, so we come to this race with a much better basis than we had in the winter tests.

The most difficult aspect of the Sakhir circuit is the braking, as there are long straights followed by heavy braking, then a tight corner and another straight. Braking performance and the feeling you get from the brakes gives you the confidence to attack and so get a better lap time. Apart from that, another priority will be to work on our top speed.

We have seen different types of racing over the first two Grands Prix, with the first one highlighting fuel saving a bit and the other shifting the focus to tyre management because of degradation, due to the high temperature. I think Bahrain will feature a combination of both these factors. We will have to save fuel more than in Malaysia and the tyres will be affected by the temperature in the Bahraini desert. We can expect a tough race, as some of the competition is very strong and we will have to raise our game to close down the gap as quickly as possible.

Kimi Raikkonen: After testing in Bahrain in the winter, we now go back there with much more experience and knowledge after the first two races. We must put that learning to good use for this race. There is a lot to do, but everyone in the team is pushing hard to sort things out as quickly as we can.

There are not so many corners on this Sakhir track, but it seems to be very difficult to get a perfect lap, due to the combination of high speed sections and some very low speed corners. You would think with only few corners it would be easy to get the lap right, but it's actually quite complicated. The key will be to find the right set-up as soon as possible and then we can improve the car over the weekend.

Obviously, every circuit can be different in terms of its effect on fuel use and tyres: looking at Bahrain, fuel saving will play a more important role than in the last two races, but it might not turn out to be too bad, as it was less of an issue than we had expected in Melbourne. Also on the tyre front, I think Sakhir could be a bit easier to deal with than Sepang and also if we can get the car perfectly right, it will make life much easier.

What can we expect in Bahrain? In Malaysia, you couldn't see it because of what happened on the first lap, but I felt I made a step forward in terms of understanding the tools I have to work with, so I think we can be better prepared this weekend. That should give us faster lap times and better positions.