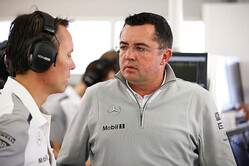 Formula 1 heads to the desert for round three of the 2014 world championship, but there won't be any sunshine during this weekend's Gulf Air Bahrain Grand Prix. The event is the latest night race to be added to the calendar, starting under floodlights at 18.00 local time. It's sure to be an incredible spectacle.

The Bahrain International Circuit (BIC) was the first Formula 1 venue to be built in the Middle East. It hosted its first grand prix in 2004, since when it has earned a reputation for fast and furious racing.

The 5.4km (3.4-mile) layout is essentially made up of four long straights. The cars exceed 300km/h (186mph) along each, at the end of which are large 5g braking events, where car stability and a faultless ERS (energy recovery system), which harvests energy under braking, are essential. Good traction is another important handling characteristic at this track, because the cars accelerate out of first- or second-gear corners on four occasions around the lap.

The middle sector provides some of the most challenging corners. Turn 10 is a tricky downhill off-camber left-hander, into which it's easy to lock a front wheel. Turns 11 and 12 are the circuit's only long corners, through which good car balance is important because the drivers are hard on the power.

The asphalt at the BIC is abrasive, but the absence of any high-speed corners makes it relatively easy on tyres. For that reason Pirelli are bringing their Soft (Option) and Medium (Prime) compounds to the race, which are the same as those used at the season-opener in Melbourne. Bahrain is extremely hot during the daytime, but lower track temperatures in the cool of the night will help limit thermal degradation of the tyres.

Jenson Button celebrates his 250th grand prix this weekend. He was the first Formula 1 driver ever to visit the US$150m track in 2003, while it was still under construction, and he has a good record in the event: he finished on the podium in 2004 and won the race in 2009.

Jenson's team-mate Kevin Magnussen has never previously raced at the BIC, but he has plenty of experience there, following the recent winter test sessions in February.

The stats you need

What makes it special: The desert location - and, for 2014, it becomes F1's newest night race

Fuel consumption: High - one of the highest of the entire season

Brake wear: High - there are four big stops around the lap

Weather: Very hot, but the evening start will cause track temperatures to drop during the race

DRS zones: 2 - one on the start-finish straight, the other on the approach to Turn 11

Safety Car likelihood: Low - the track is wide and the possibility of rain is very low

Grid advantage: The left side of the grid holds a slight advantage

Jenson Button: "It's hard to believe that this weekend's race will be the 10th Bahrain Grand Prix - I won this race back in 2009, I've had lots of good performances here, and I really enjoy the challenge the circuit presents. You always feel like you can get a little bit more out of yourself, and the car, which makes it a difficult but rewarding track on which to drive.

"Sunday's race will be my 250th grand prix start. That's crazy: it feels like only yesterday that I was celebrating my 200th, with a win for McLaren in Hungary back in 2011.

"Things never stand still in Formula 1, and we go to Bahrain facing another new challenge: the circuit's first night race. It'll be interesting to see what sort of race we have under the floodlights - racing at night always adds to the atmosphere and sense of occasion, and I think this weekend will be no different.

"We've scored some useful points in the first two races, which was always our objective for the opening quartet of fly-aways [ie, Australia, Malaysia, Bahrain and China], and I hope we can get some more points in the bag this weekend."

Kevin Magnussen: "It'll be a good experience to go racing at a circuit on which I've already driven a Formula 1 car - a first for me in fact because I already have four days' running under my belt from the recent winter tests. While that doesn't really make a massive difference, because you can learn a circuit relatively quickly, assisted by simulator experience, it does mean you can go straight into Friday's practice sessions on the front foot. You don't need to familiarise yourself with the track first.

"I really enjoyed the tests and filming days we did in Bahrain earlier this year actually - the track has a good mix of corners, and the high-speed stuff around the back of the circuit is really enjoyable when the car is working well.

"Although the Sakhir [Bahrain] track has several high-speed corners, it's not as fast as Sepang [Malaysia] so I'm hopeful that we'll be slightly more competitive this weekend than we were there. I still think the track temperatures and our lack of downforce will make it hard to get the car into the sweet spot we found for it in Melbourne, but I'm hopeful we'll be able to achieve a decent balance for the race.

"The grand prix itself will take place in the evening, so the track will be slightly cooler than it's been for any previous Bahrain Grand Prix. I guess that'll help all the teams, but I think we can still benefit from it.

"It's always fascinating to try new things, and I really hope this weekend's event, the 10th Bahrain Grand Prix, is a great success."

Eric Boullier, Racing Director: "Although we didn't enjoy the same level of competitiveness in Malaysia as we had in Australia, we nonetheless took home 10 valuable world championship points That's not enough, but it's better than some of our competitors managed.

"At the moment, we concede that we don't quite have the performance to take the fight to the front-runners, but the considerable in-cockpit abilities of Jenson and Kevin, and the ever-impressive resource, motivation and competitiveness of our race team, mean that we can expect to be in the mix on Sunday.

"Since the Bahrain Grand Prix will be taking place just a week after the Malaysian race, we don't expect to see a significant change in the competitive order, so our main aim will be to ensure that we have a faultless weekend from a reliability and operational standpoint. Despite the short interval between the two races, we'll be incorporating a small number of design tweaks, nonetheless.

"For our Mumtalakat shareholders, this 10th Bahrain Grand Prix should be a very special event: the prospect of a night-time race in Bahrain is truly tantalising. Although we already race in the dark in both Singapore and Abu Dhabi, the Sakhir track sits in the Bahraini desert and should look wonderfully spectacular when its illuminated asphalt is contrasted against the dark expanses of unlit sand and rock. More important, it should add a further dimension to the scope and spectacle of modern Formula 1."