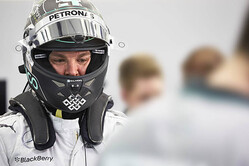 Nico Rosberg has been handed a reprimand for impeding Sergio Perez during today's second session.

The German, who finished the day second overall, was involved in a couple of odd incidents over the course of the two sessions, but it was that involving Force India's Perez which grabbed the attention of the stewards.

The German was adjudged to have "slowed unnecessarily and recklessly" in front of the Mexican between Turns 13 and 14, a breach of Article 16.1 of the FIA Formula One
Sporting Regulations.

Having received a report from the Race Director, heard from the drivers and team representatives and examined video/audio evidence, the stewards gave Rosberg a reprimand, his first of the season.

In another incident, Esteban Gutierrez was found not to have impeded Felipe Massa in the same corner, therefore no further action is to be taken.