An alarming trend as Sutil gives up drink 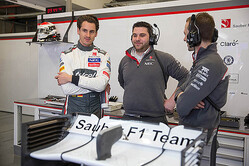 In an alarming means of keeping within the 2014 weight limits, Sauber driver Adrian Sutil has admitted that he will drive without a drink bottle on Sunday.

The German, at 1.83m and 75kg, is one of the tallest, heaviest drivers on the 2014 grid, and with the minimum weight limit of car and driver increased by 50 kg this year to 692kg is one of several drivers attempting to reduce weight in order to retain their seats. Such was the concern, there were fears that drivers such as Nico Hulkenberg (1.84m and 74kb) might be overlooked this year in favour of a lighter driver.

Sutil, along with Jenson Button and Hulkenberg, has worked hard to lose weight, some claiming the Englishman having gone a little too far and leaving himself looking slightly gaunt. However, in a worrying attempt to ensure he is as close to the minimum (combined) weight as possible, Sutil will race this Sunday without a drink bottle on board, a move which, considering the event takes place in the desert, could seriously impact his energy levels and thereby his concentration and physical wellbeing.

"There is a danger," he told reporters. "You are driving more than 300 kilometres per hour on the straights and we need to be in good shape, in our bodies and our mind. It's not so easy any more, and you can't guarantee every driver is one hundred per cent from a physical point of view.

"I can definitely feel it," he admitted. "I lost three or four kilos compared to last year and I tried to be very light already last year. This extra weight I'm losing now is getting to a critical point. I'm trying to control it and to always be in a shape to finish the race. But you can feel it before the race, that you haven't got your ultimate power.

“You are almost getting in an area where you don't work well up here," he added, tapping his temple. "This is the danger we are facing."

"All the tall drivers, not just me, have to lose so much weight," he continued. "There's not so much you can lose anyway. You can't even train because you want to lose the muscles you have. It's a difficult situation at the moment and I don't think it's fair. Small drivers can eat whatever they want, get a belly, yet because we are naturally heavier we get a penalty, something like 0.5 seconds per lap or more. That's not because they are better drivers, just because they are lighter. This is not as it should be in Formula One because I still see it as a sport."

With a nod to the drivers' union, the Grand Prix Drivers' Association, which in reality rarely speaks out on anything worthwhile even though it represents the men who drive the cars that are the show, Sutil suggested his fellow drivers should speak out.

"Everyone is responsible for it," he said. "We want to have a good sport and us drivers could do a bit more if we hold together. Everyone should think about what we do and why we are in this situation. Is there any reason for it? No.

"The sport would be the same or better if we had a normal weight limit," he concluded. "We could eat properly, be happy at the circuit and we would not be having this discussion."