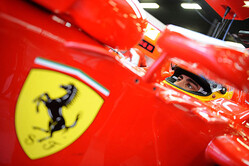 With drivers allowed to pick permanent numbers from 2014, Fernando Alonso has revealed that he intends to use 14.

Teammate Kimi Raikkonen is likely to use 7, though this also coveted by Jules Bianchi. Nico Rosberg is hoping to use 6, while the first choices of other drivers include 11 (Perez), 19 (Massa), 25 (Vergne) and 77 (Bottas).

Attending a promotional event with Santander, Alonso declared his belief in Ferrari and that the team will be competitive next season.

"I have faith in Ferrari and I am happy to be able to work with Raikkonen, a driver who has a rare talent and from whom I can learn a lot," he said. "The experience he and I have will be vital to develop the car: the most important thing is that we work together for Ferrari and that a red car is first across the line, no matter which one.

"Why am I optimistic? Because I'm in the Scuderia," he continued. "Maybe now there are those who believe that it would be better to choose Red Bull, but Ferrari is always the winning hand and one has to have maximum faith in them. I hope we can improve on 2013, maybe making the most of the rule changes to be at the same level as the best."