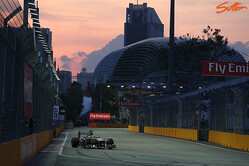 Sky Sports F1 has revealed that it will be the only place to watch the live Grands Prix in Monaco, Brazil and Singapore when F1 returns next season.

The channel has confirmed its coverage of every race next season, with ten exclusively live.

The Grands Prix live only on Sky Sports F1 include three of the first four races and two of the final three. They are Australia, Bahrain, China, Monaco, Austria, Germany, Hungary, Singapore, USA and Brazil.

"The rule changes mean 2014 is the most eagerly awaited season in years and only on Sky Sports F1 can viewers enjoy the full story live," said Sky Sports executive producer of Formula 1 Martin Turner. "From the first corner in Australia to the chequered flag in Abu Dhabi, we'll be there offering our viewers unrivalled live coverage and analysis. Our ten exclusively live races include several of the season's key Grands Prix including three of the first four, two of the final three and of course, Monaco, the most glamorous weekend on the calendar. We can't wait."

The full 2014 FIA Formula One World Championship race calendar is as follows:

The ten races shown exclusively live on Sky will be shown as extended highlights on the BBC, which according to the broadcaster "are proving increasingly popular with audiences - the highlights from Germany saw a peak audience of 7.7m". All 19 races will be live on BBC Radio 5 live or 5 live sports extra.

"It has been another great year for F1 on the BBC," said the BBC's Head of F1, Ben Gallop. We're now very much looking forward to 2014 and feel we have a strong package for our TV coverage. This format of both live and highlights is attracting a wide range of viewers and we hope to see even more people tuning in next year to experience the magic of Formula 1."

The BBC has a deal to broadcast F1 racing, through to and including 2018.