Allison: Everything in place for new era 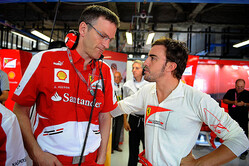 Ferrari Technical director James Allison looks ahead to the new formula coming in 2014 admitting that while aerodynamics will remain the key his team is well prepared.

"It's true that the influence of the power unit on overall performance of the car will be much greater than in the recent past," he told the team's website. "From when, in 2007, the freeze on engine development took hold and performance levels converged, it's clear that its influence on the pecking order got ever smaller, while aerodynamics grew in importance.

"In the years leading up to that point, that wasn't the case: I can well remember how important the engine was in terms of Ferrari's successes in the first half of the Noughties. Now we will witness a re-balancing, although aerodynamics will still be a key factor.

"I haven't spent time going into the details of the design of the new car, as it wouldn't make any sense at this stage," he continued. "Rather, I concentrated on trying to direct adequate resources and on putting the best people in the right places to optimise attention to detail. Actually, when you tackle a regulation change like this one, it's not something you only start thinking about six months beforehand. When I arrived in Maranello, work on the project had been ongoing for two years. I tried to immerse myself in its philosophy and adapt to the team as quickly as possible. Having said that, what you could call my active role in the design of the car involves working identifying the areas on which maybe we should push harder and concentrate more effort.

"Aerodynamics remains the lifeblood of a modern Formula 1 car," he concluded. "It's impossible to be competitive without having the right tools and adequate resources: now we can say we have moved on from being maybe the fourth or fifth team in terms of the tools we have, to once again being at the cutting edge and everything is in place to open up a new Ferrari era."