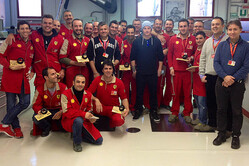 It was a case of #There'sKimi when Kimi Raikkonen paid a visit to Maranello to meet the team and his new engineer.

The Finn, who rejoins the Italian outfit after an absence of just over four years, met with team boss Stefano Domenicali and senior engineers to discuss the 2014 car and meet up with old friends.

The visit also allowed Kimi the opportunity to meet Antonio Spagnolo who will engineer his car next year.

His engineer during his previous stint with the team, during which he won his title, was Andrea Stella, who now engineers for Fernando Alonso.