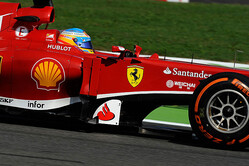 As teams continue to discover the benefits of the internet and social media, Ferrari has revealed that, in a unique move, its fans will get to decide the name of its 2014 contender.

Speaking at his team's media Christmas lunch, Luca di Montezemolo revealed that in January fans, by means of the team's website, will be able to vote on the names of the new car.

As long ago as 1996, the Maranello outfit was the first F1 team to present its new car online, and the unveiling of the F138 proved popular, with 83,000 fans simultaneously accessing the site from 158 different countries.

Visitors come from 227 countries with Italy still leading the way (naturally), ahead of Britain, Spain, USA and Brazil. However, there are also plenty of fans in the Central African Republic and Tonga.

Of the most significant increases, Finland has gone up by 554%, with the news of Kimi Raikkonen's return to the fold being the most clicked-on story of the year (166,119 hits)