Rosberg on duty for Mercedes 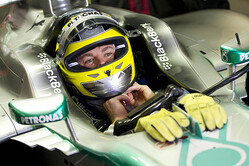 Mercedes is the last team to confirm its driver line-up for this week's test in Bahrain, revealing that Nico Rosberg will be on duty for all three days.

While Lewis Hamilton prepares for the 2014 season - and a possible reconciliation with his girlfriend Nicole Scherzinger - by tweeting pictures of Roscoe and friends during "high-altitude winter training", teammate Rosberg has been kept busy with sponsor commitments on Thursday before visiting Mercedes factories at Brackley and Brixworth and attending the team's Christmas party at Silverstone.

Today, Mercedes tweeted that the German will be on duty for all three days of the Bahrain test which gets underway tomorrow (Tuesday).

Ferrari is to run Pedro de la Rosa and Jules Bianchi whilst Sebastien Buemi is on duty for all three days for Red Bull. Toro Rosso will have Jean-Eric Vergne in the car for the first day and a half before handing over to Daniil Kvyat.