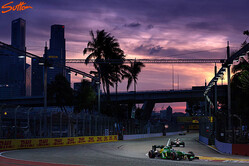 Officials at the Bahrain International circuit are to test a new floodlight system this weekend in anticipation of the 2014 Bahrain Grand Prix being held at night.

2014 marks the tenth hosting of the Bahrain Grand Prix and organisers are keen to follow the example of Singapore and hold the race at night, a move which will also go down well with Bernie Ecclestone in terms of TV viewing figures.

As a result, this weekend, as the circuit hosts a sound of the World Endurance Championship, organisers will take the opportunity to test a new floodlight system in anticipation of next year's switch to a night time F1 race.

"This is by far the biggest development project we have ever undertaken at the BIC since the circuit was first built," said BIC chief executive Salman bin Isa al-Khalifa said in a statement. "I believe that there can be no better way for us to mark our 10th anniversary in F1 by demonstrating our long term commitment to the sport through this significant investment.

While the 2014 calendar has yet to be officially confirmed, Bahrain is currently scheduled for April 6, the race timed to begin "after sunset" according to a spokesperson for the circuit.

The floodlight system involves 495 lighting poles, ranging in height from 10-45 metres, and will be suitable for high definition TV broadcasting.

Due to the fact that in previous years pre-season testing in Spain has been hampered by bad weather, next year Bahrain is due to host two of the three pre-season tests, one running from 19 to 22 February and the second from 27 February to 2 March.

The 2011 raced was eventually cancelled by the organisers following months of dithering, especially by the FIA, over the civil unrest in the country, Red Bull star Mark Webber one of the few to speak out against the holding of the race.

There were calls also for the cancellation of 2012 race due to reports of alleged human rights abuses committed by the Bahraini authorities, while team personnel voiced concerns about safety however, the race went ahead as planned on 22 April without incident.