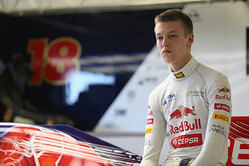 Toro Rosso has confirmed that it will run its 2014 race drivers - Jean-Eric Vergne and Daniil Kvyat - at next week's tyre test in Bahrain.

Although all eleven teams were invited and can use their 2013 cars, only four teams - Ferrari, Red Bull, Mercedes and Toro Rosso - have taken up the offer.

The Faenza outfit confirmed its line-up for the three-day test, the focus of which is Pirelli's 2014 rubber - via Twitter this morning.

Ferrari is to run Pedro de la Rosa and Jules Bianchi whilst Sebastien Buemi is on duty for all three days for Red Bull. For the Faenza outfit, Vergne will drive for the first day and a half, before handing over to Kvyat.

The test will provide a useful opportunity to evaluate next year’s tyres, especially as the opportunity to try one 2014 tyre type on Friday at this year’s Brazilian Grand Prix was wiped out by the rain.